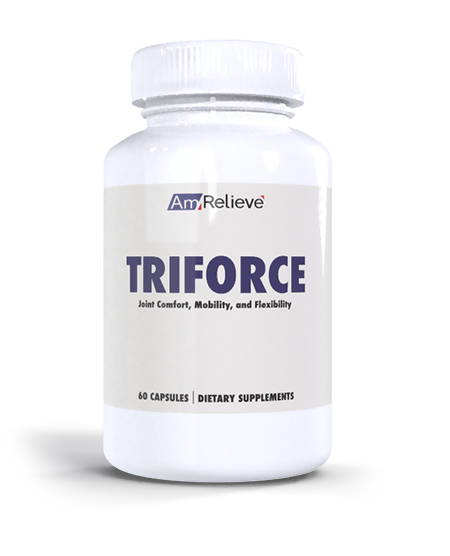 Soothe Achy Joints And Rebuild Cartilage With this Product

Is This The Perfect Solution For Winter Weather Joint Pain? 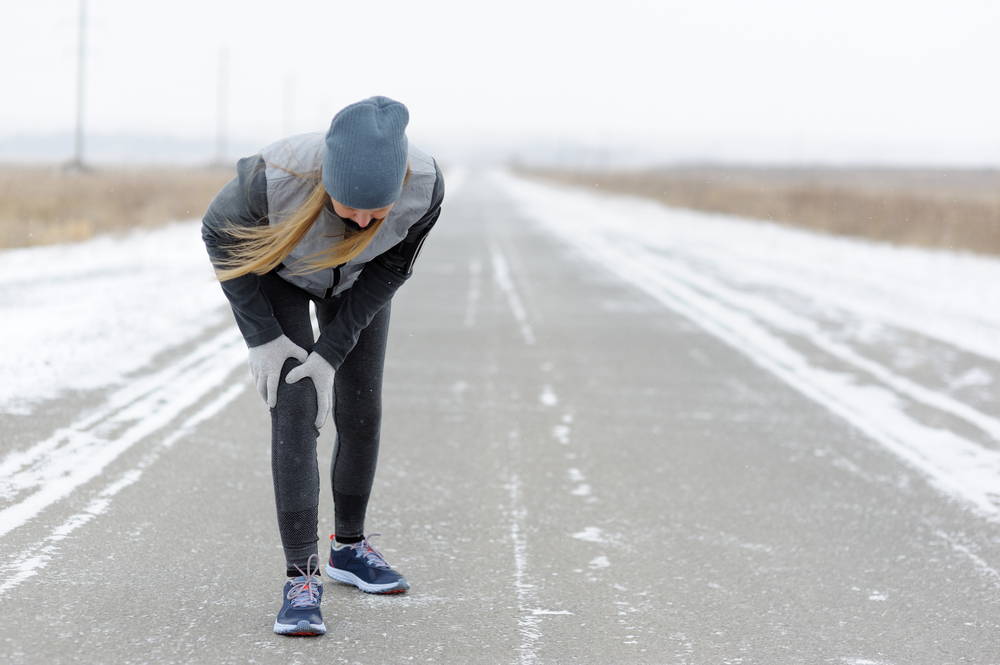 Did you know there’s a scientifically proven way to keep your joints silky smooth even in the coldest winter weather?
When the sub-zero temperatures of January and February roll through town, your joints are always the first to know.
Because as the temperatures drop…
You’ve probably noticed that you feel more stiff than usual...
Or that it’s harder to climb a flight of stairs, pick up a child, or even just get off the couch...
And you probably dread shoveling the driveway… because you know your knees, back and hands will “pay for it” later!
Well, that’s because research shows that... YES... those bone-chilling temperatures REALLY do a number on your joints and muscles.
But you don’t have to suffer another long achy winter… or any other season for that matter!
Recently, thousands of seniors have been adding this 1 little thing to their morning routine, and even in the coldest winter temperatures it keeps them moving pain free!
No, it’s not a drug or addictive painkiller.
In fact, it’s surprisingly natural and comes with zero side effects.
What’s more is that many people report that their aches and pains actually get better as the day goes on - instead of getting worse.
I don’t have to tell you what a godsend that is now that the toughest winter months are here.
So what is it?
It’s a brand new breakthrough joint pain solution that can dramatically reduce joint pain in just a few days.
And in 30 days or less, this revolutionary approach supports natural processes in the body that can actually repair worn out joints.
Many users say it feels like their joints are 20 years younger within a month…
Allowing them to move, climb stairs, and get on with their day without pain or mobility issues holding them back

Harmful painkillers, painful injections, and expensive surgeries may now be a thing of the past, thanks to the TriForce™.
Imagine…
It might sound hard to believe, but TriForce could help do all of those things and more.
‍
The best way to describe it is like a natural time machine for joints…
‍
In less than a week users report a dramatic difference in their pain. And after a month they say they’ve gone from needing help walking and struggling to move - to enjoying total freedom.
‍
And as I’m sure you can appreciate - in these uncertain times, being physically strong and mobile has never been more important.

The 3-Step Natural Process That Can Regenerate Old Joints

1. Simply take 2 easy-to-swallow capsules a day and within 1-7 days you can notice your pain melt away
‍
2. By day 8, TriForce actually helps your joints produce more synovial fluid which is like engine grease for your joints - allowing you to move without any pain or mobility issues
‍
3. By day 30, your joint actually begins to repair itself, helping turn back time on your joints so you can move like you did years ago
‍
If you’ve been struggling with joint pain for a long time, we’d forgive you for being skeptical.
‍
We didn’t believe these claims at first either. That was until we saw the scientific proof and all the glowing feed from stunned TriForce users.

Helpful Hint: Did you know resting bad joints for too long could be the worst thing you ever do?

Surprisingly, not moving joints can lead to more pain and less mobility.

The unique combination of the natural ingredients in the TriForce™ have been proven to help joint pain in countless of studies.
‍
In fact, the key ingredient, FruiteX-B works so fast on joint pain that it’s said to have a “take it, feel it” effect - without having the harmful side effects of other painkillers.
‍
And a study on another key ingredient showed strong anti-inflammatory and anti-arthritis properties -while reducing pain and improving mobility.
‍
The bottom line: With short-term use you can enjoy incredible relief from pain, inflammation, and bone-on-bone grinding.
‍
With long-term use it’s possible to actually restore your joints back to their former youthful glory - putting an end to joint pain altogether. 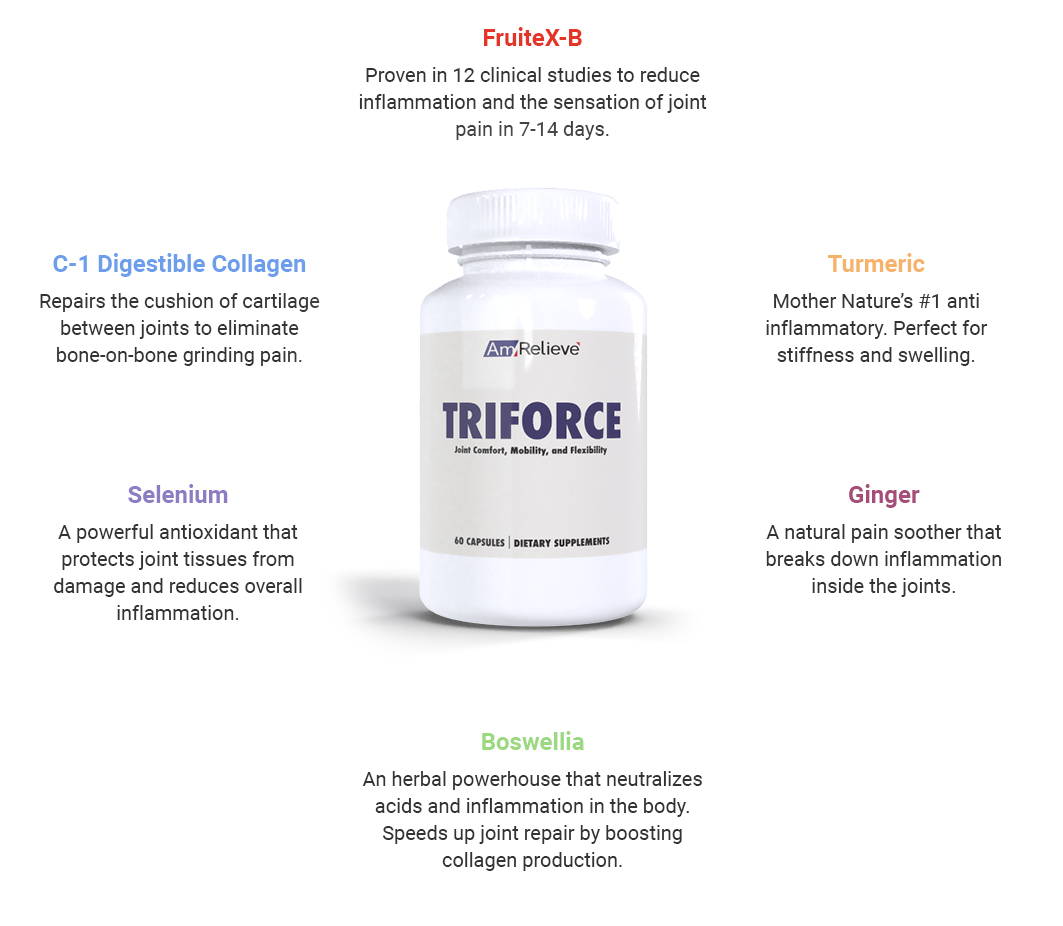 Sounds great, how much does it cost?

For general painkillers you can expect to fork out $200+ dollars a month.
‍
And for arthritis medication, you could be facing an eye-watering bill upwards of about $2,000 every single month.
‍
The creator of TriForce wants everyone to have access to the relief and freedom they deserve - without feeling like they’ve been robbed.
‍
Which is why you won’t pay a fraction of the costs of harmful medication. In fact, right now, new customers can get up to 69% off TriForce™ on this website here.
Not only that, but you can try TriForce under the full protection of a 90-day risk-free trial.
‍
If you don’t experience the same relief and mobility as thousands of other users have - you get every single cent back (no questions asked).

TriForce has experienced a surge in demand since being featured on popular news outlets, such as Fox, CBS, and USA Today.

Stock is running dangerously low. Tap the button below to claim your discount and check availability now!

IN STOCK!
Get Your Triforce Formula Now